The Transferable Skills of Teaching

Regardless of your career plans, serving as a teaching assistant or instructor helps you gain skills that will make you a better employee and a better boss. 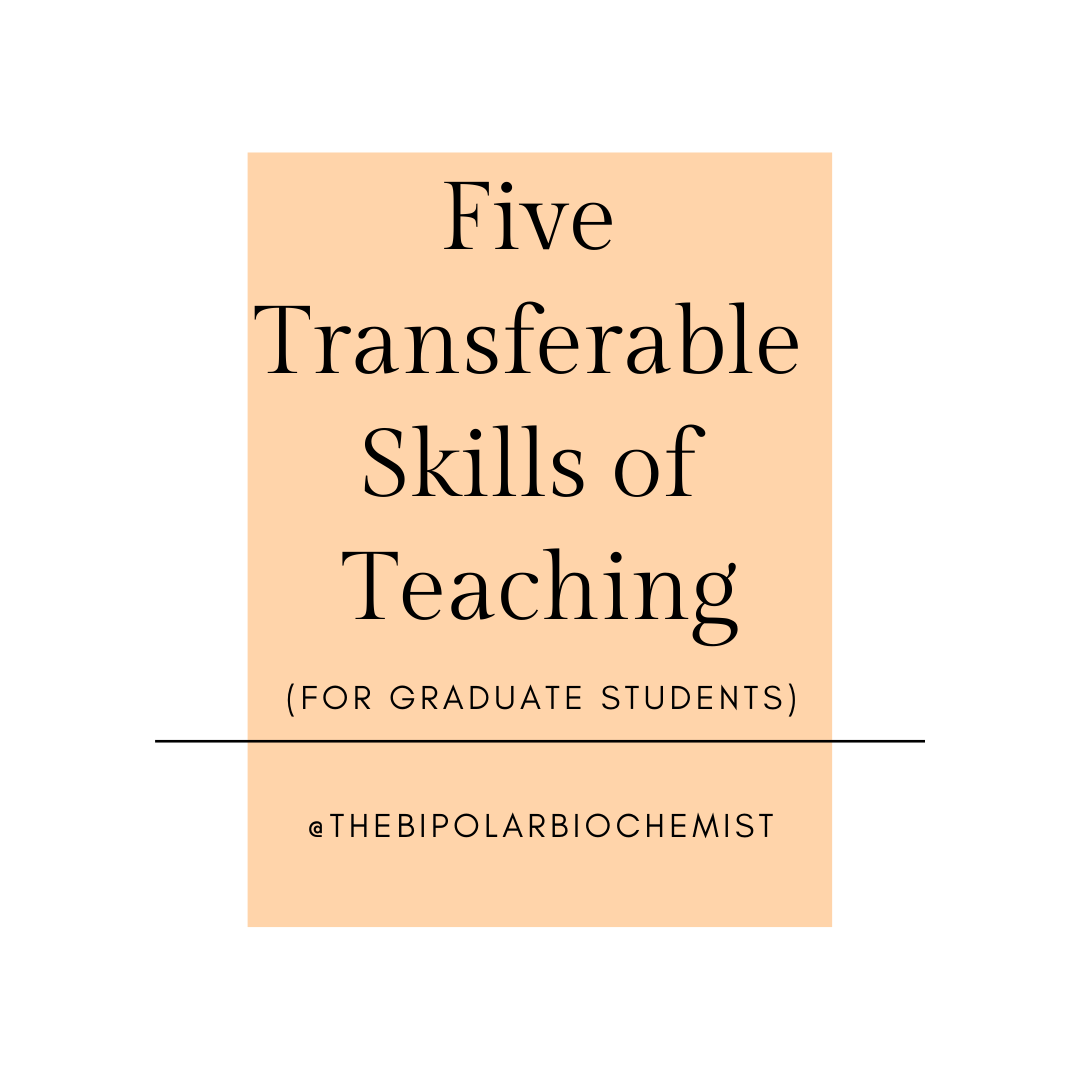 Earlier this semester, I was able to attend a workshop put on by our Center for Teaching and Learning about the transferable skills of teaching. As I was sitting there and taking notes on what they said, it started to really sink in that THIS was what was missing from the mindset of so many of my peers, the other Chemistry PhD students who have to TA to earn a stipend. I don't mean that to say that they are "lacking" as TA's, they almost all do really good jobs and are successful at running a teaching lab. But, a lot of them don't enjoy their work as a TA, or they view it as a distraction from what's really important: their research. And their students notice. I can't tell you how many of the other students I've met who, when I ask them for their TA's name, just stare at me blankly.

So, what is the problem? Why is it that so many of these people, who are clearly incredibly intelligent and capable, are unable to connect with their students? I personally believe the issue lies in that mindset of "I HAVE to TA to get paid, but my research is what I'm really here for". And this is true, to an extent. We are all here, getting PhDs, for the research, but ultimately the goal is to get a job afterwards. Some may want to go on to be professors, researchers, industry scientists, government workers, and who knows what else. And jobs aren't given out just because you're smart, you have to prove to whoever is hiring you that you are a worthy investment. That you will better their company or organization by being good at your work, but also by working well with their team. So while we're getting our graduate degrees, it's so important to soak up all the knowledge and training we can, both in and out of research.

And because of this, I want to share these 5 Transferable Skills with as many people as I can. So here they are: 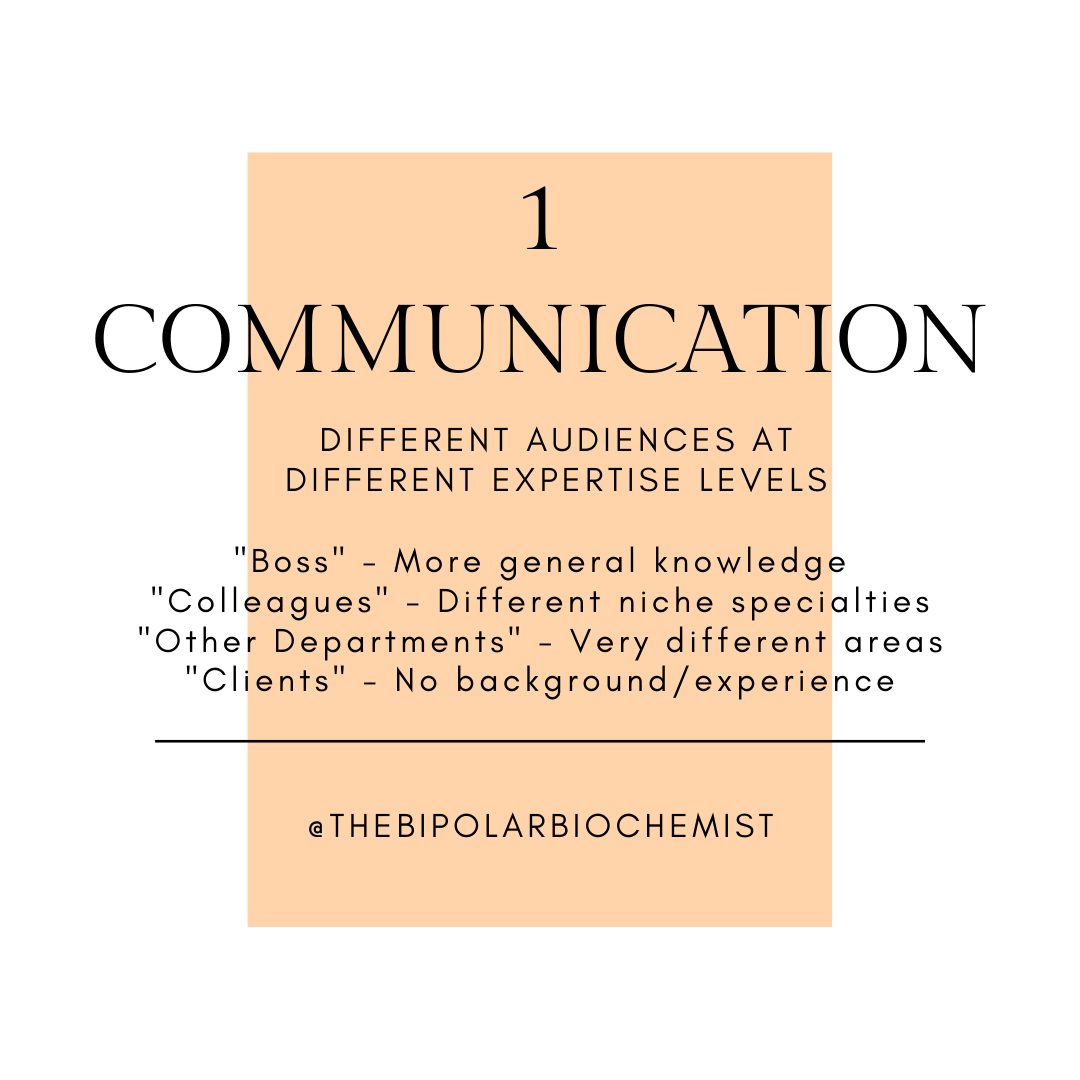 One of the most obvious, but also most critical, skill you can gain by teaching and working with students is communication! It may seem unimportant, that the way you speak to students could help you find a job, but what you're actually learning is how to talk to people from different expertise levels. In grad school you have a few different "types" of people you need to talk to:

Your advisor/PI – someone who is an expert in your field, but also isn’t going to know your project as intimately as you do, so you can use a lot of technical jargon with them, but will still likely have to explain some things in a different way for them to understand

Other members of your lab – they are more likely to know a lot of the nitty gritty details about protocols, software, etc, but they don’t necessarily know how it applies to your project

Your committee members or other professors – these people are experts in their respective fields, and will have some understanding of your project, but you will definitely also need to simplify some concepts when discussing things because they likely will not know the specific details

Undergraduate students – be it in the form of teaching or through mentoring young researchers, you will have to explain complex concepts to students that have much less expertise, if any at all, in your given area

So how does this apply to the “real world” of jobs? Well, a typical position for a PhD will involve being a “boss” to some, a “colleague” to others, and an “employee” of a few. So you’ll end up with those same types of people who you have to communicate with effectively who will all have different levels of knowledge on your subject. And this is an area that most hiring committees care a lot about. No matter how smart or successful you are, if you can’t effectively relay your ideas to the people you have to work with, how can they expect that you’ll add value to their institution? 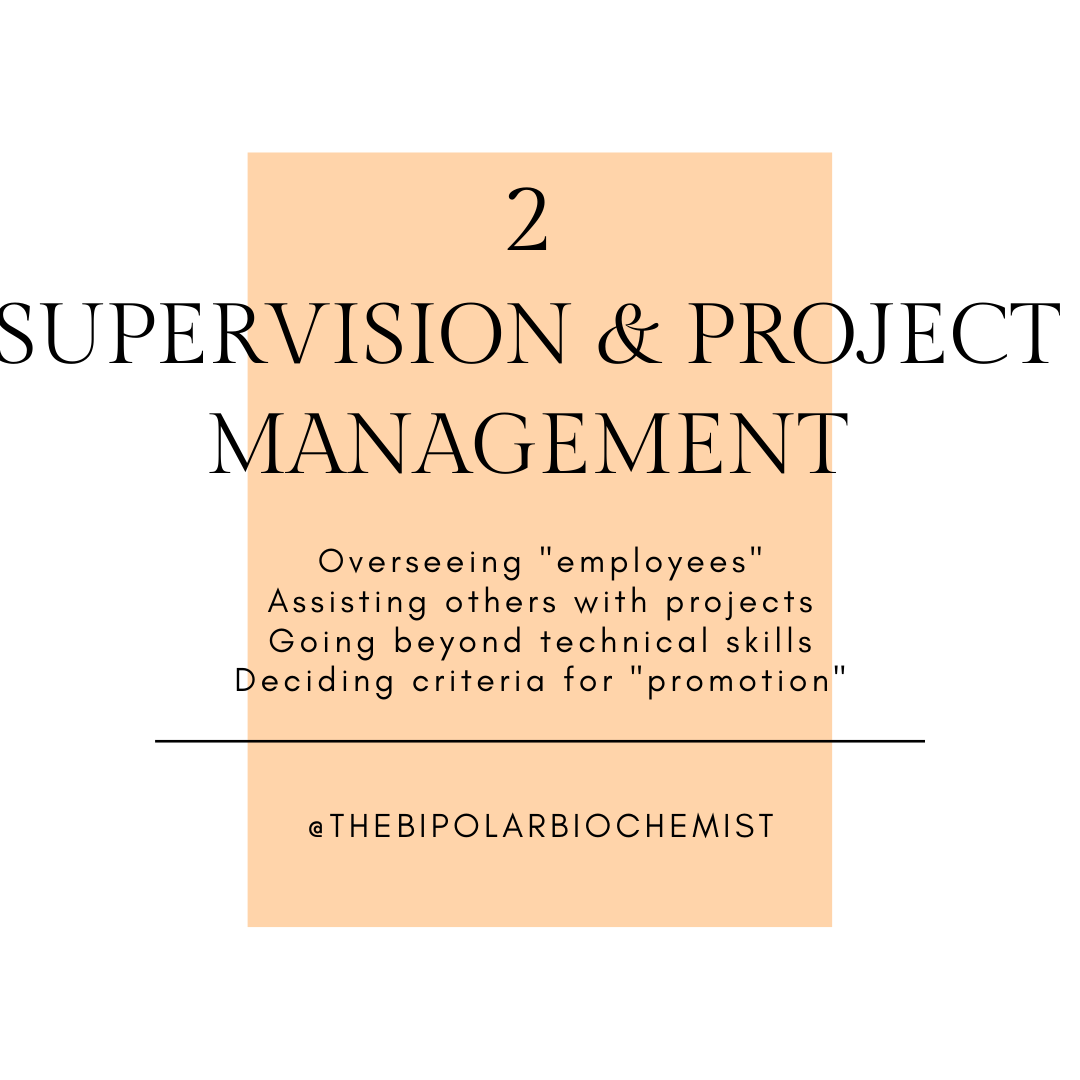 The second skill that may seem obvious, or may not, is supervision and project management. Like I said before, it is very likely that the career of a PhD will involve being a boss to at least a few people. And most of the individuals involved in hiring you want to make sure you’re comfortable and prepared to lead. By teaching students, you’ve already begun doing this, whether you’re fully aware of it or not. You spend your time overseeing their work, and guiding them enough that they are able to complete their work, but also stepping back when appropriate and giving them a chance to show you what they know. You also either create or use some sort of syllabus, schedule, and grading rubric with your class, which is equivalent to developing a project timeline with built-in criteria that can be evaluated for successful execution. On top of that, by deciding what factors make a student worthy of that “A+” grade, you are developing the same skills that could be used to decide what factors make an employee worthy of promotion. 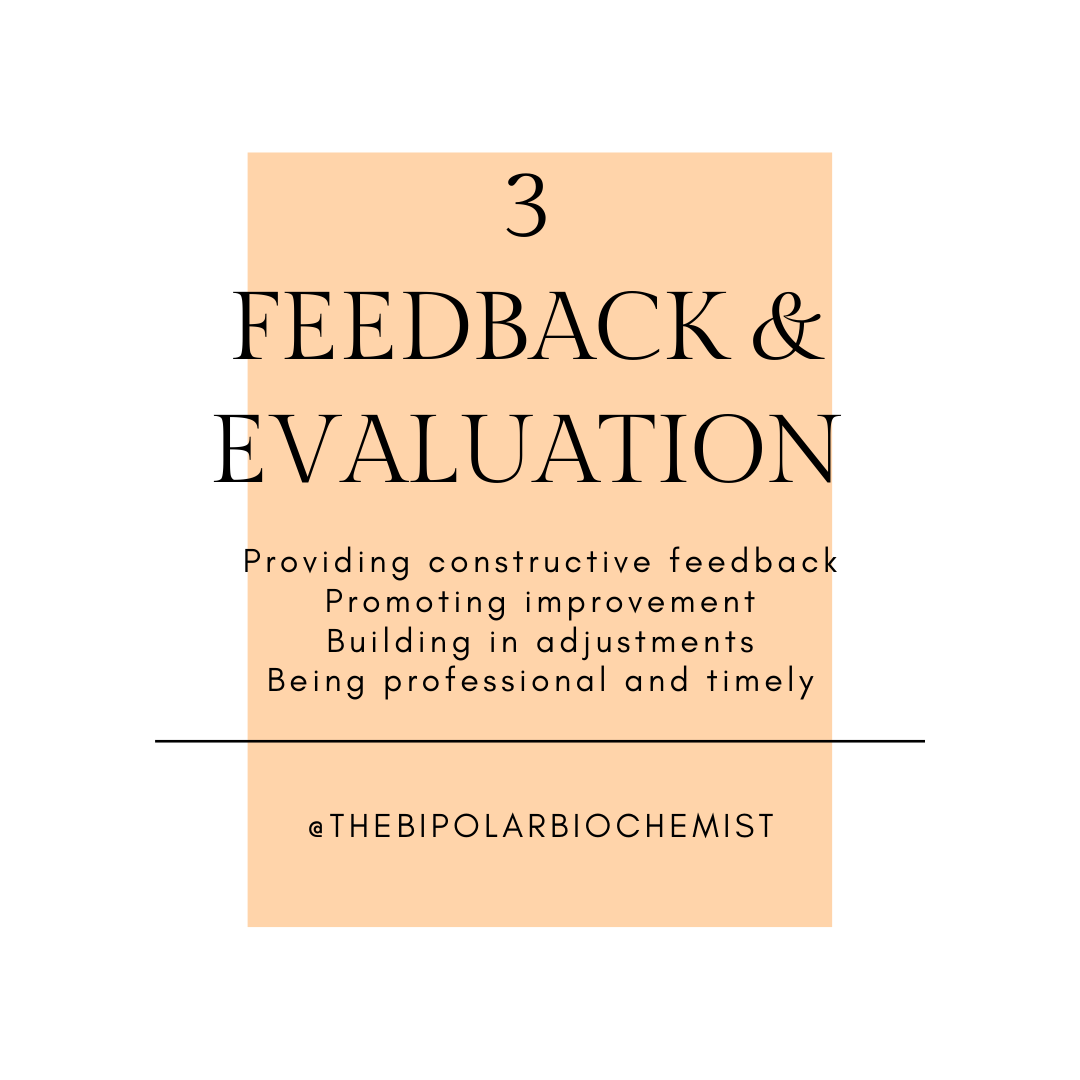 Next, we’re getting into what might be a more abstract idea that, while you may recognize it’s importance in teaching, doesn’t always translate into “here’s a skill I have that means you should hire me”. One of the largest parts of being a TA comes in the form of feedback & evaluation; you’re probably constantly grading students, explaining to them how they may have said or done something wrong, and trying to redirect them to the correct thing. Ideally, you’re also constructive when you do this, instead of just failing a student repeatedly for making the same mistake over and over, you can explain to them what the mistake is and how they can overcome it. You’re also hopefully being professional and timely as you do so, returning student grades in a reasonable amount of time and not being too casual or mean with them in regards to their work.

I think one additional aspect of this that is incredibly important both for teaching and for leading a group in work, is “building in adjustments”. What does that mean? That you’ve noticed there’s one thing that everyone (or almost everyone) seems to struggle with when they first see it. And you decide that moving forward, you’re going to add something extra that will help future people get through that thing. For example, I TA for gen chem labs, and during the second semester they have to use Excel, A LOT. And the first time they really had to use it in the past was to do several calculations and make ~6 graphs. And the first time I TA’d this lab over half of my students either chose not to do it (they get one dropped lab grade per semester) or ended up scoring essentially a failing grade. And I just felt so crushed, I thought we had gone through enough to prepare them for it by explaining what calculations they needed to do and what the graphs would be and what to expect. And then I realized, most of them had never really used Excel before! They had no idea how to do functions or select data for their graphs, or use tangent lines. So I worked with the lab coordinator and offered my students for that semester an extra workshop where we went through everything and they could earn their points back, and then I helped set up an additional experiment to do in future semesters that teaches them those basics a week before the big one. 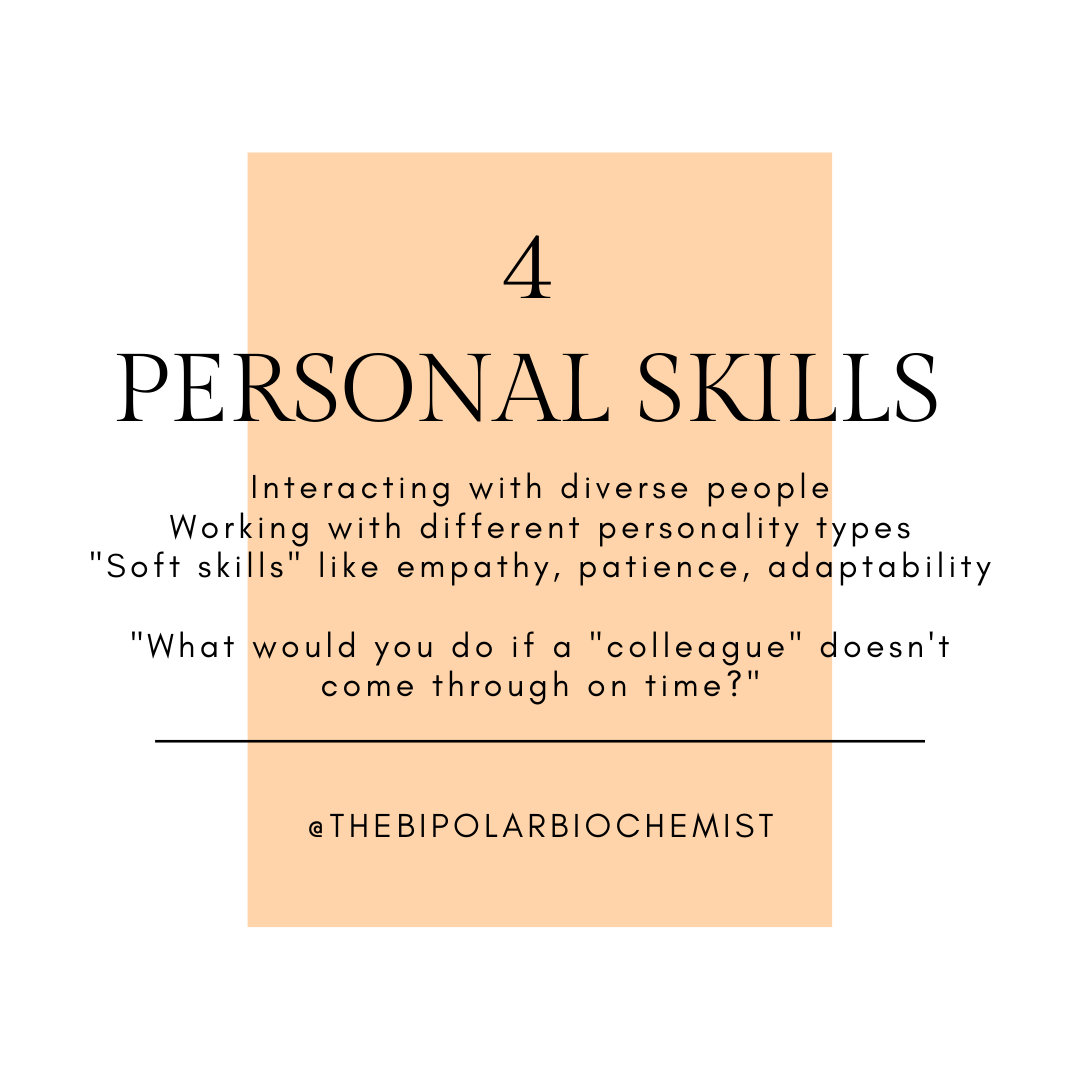 Okay, we’re almost to the end, and we’re at another one that you’re probably gaining just by working with students, which is just learning how to work with people. Being empathetic that they have lives outside of your class, and sometimes they won’t get their work done on time, or they’ll score badly on an assignment, and that doesn’t mean they’re bad or unintelligent, it means they’re people. You also will have very diverse classes, so you can slowly learn about different communities and how to respectfully work with them. One of my favorite moments of the workshop was when the speaker said “What do you do when a student turns in something late? Well, maybe you just fail them and mark all over their paper. But in an interview, they might ask you ‘what would you do if a coworker doesn’t meet a deadline you were relying on?’ well, you can’t just fail them. Maybe you ask if everything is okay, or if something is going on. And you’ll be really surprised about what all they’ll tell you if you just ask.”

Lastly, you learn a lot about problem solving when you’re teaching! A lot of times when things go wrong, you have to think on your feet and come up with an appropriate solution. You also have to learn how to be comfortable being the “adult” in the room, which means you know not only the material well, but all of the other administrative type things that go into a classroom. You need to know appropriate measures that need to be taken in instances like inappropriate behavior, medical emergencies, or academic dishonesty, and what you’re responsibility is as an educator in each scenario, Because in the “real world” there will always be appropriate measure to take and protocols to follow and documentation to be filled out.

I hope this helped frame teaching a little bit better! Like I said before, it’s really upsetting when students can feel that the people guiding their education don’t care. But if you just remember that by putting your all into teaching you’re benefiting your future just as much as theirs, I hope it can help you find that passion for teaching that you probably already have for research. 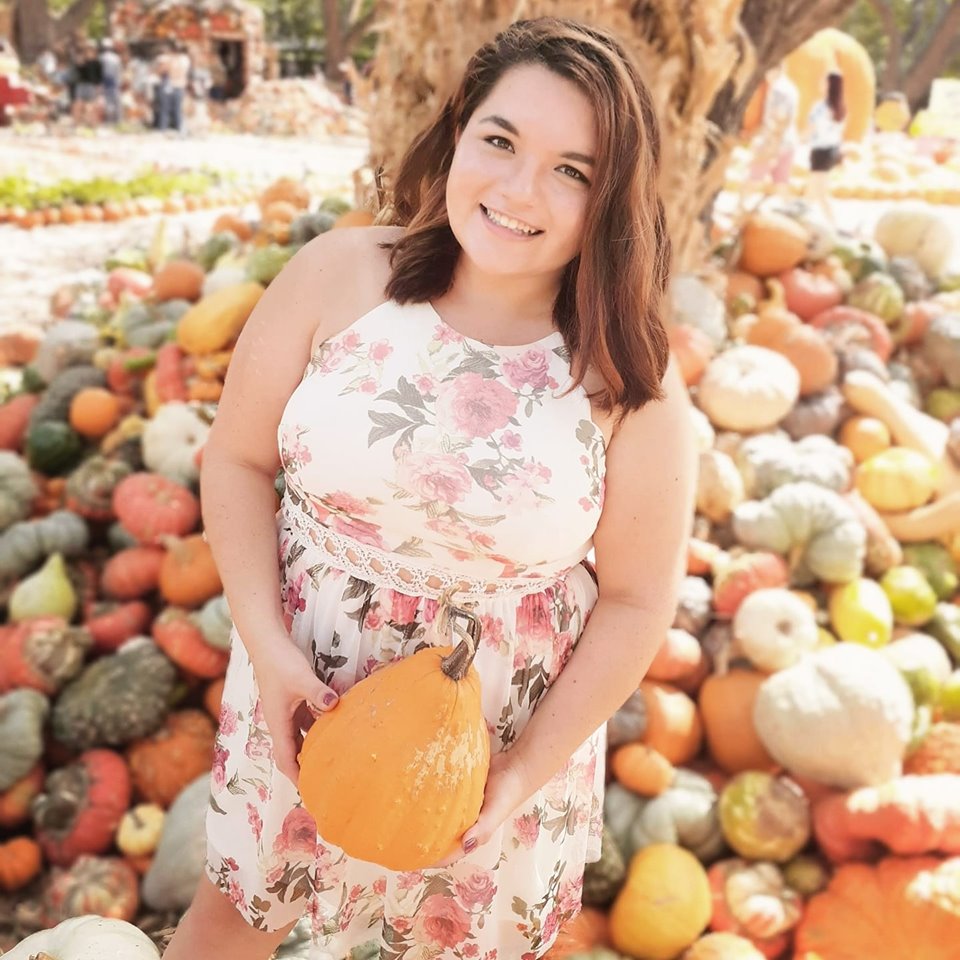